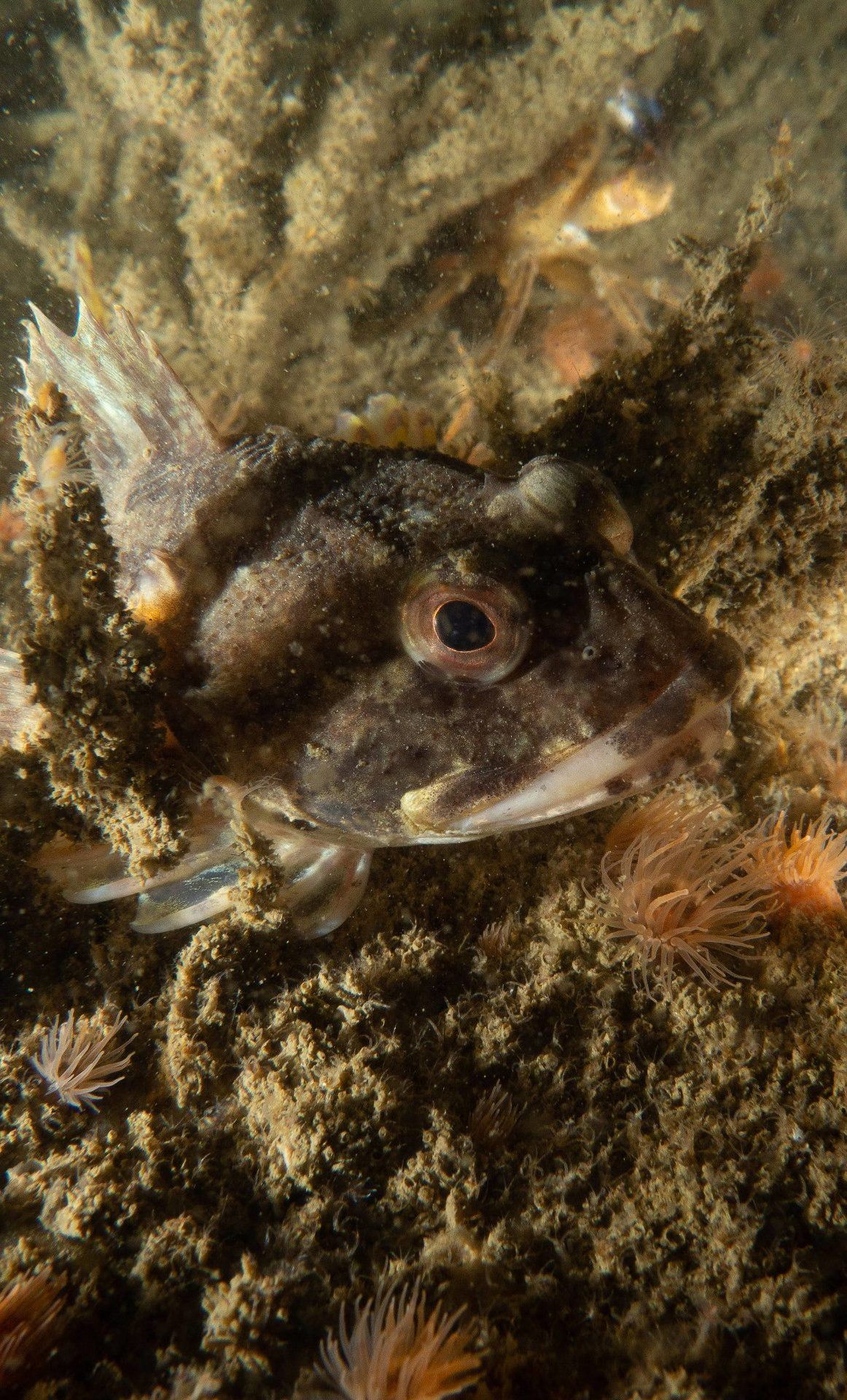 Because the Wadden Sea provides a wide range of functions for fish, Wadden Tools Swimway takes the life-cycle approach as its starting point. Fish make use of the Wadden Sea during certain periods of their life, but many species also spend part of their life elsewhere. In order to determine which measures can strengthen the function of the Wadden Sea for different fish species, we first need to know in what phase potential bottlenecks occur. Similar to birds – of which some species breed in the Wadden Sea area, while others spend the winter there or fatten up for their journey en route to their breeding areas – different species of fish visit the Wadden Sea at different times of the year for different purposes. For instance, plaice, sole and herring use the Wadden Sea as a nursery in spring and summer. Sea bass, mullet and dab come to forage, some in the warm months and others when it is cold. Other species such as flounder, hooknose and bullrout stay all year round. Potential bottlenecks may occur in processes that affect settlement, survival or growth of populations.

An enormous amount of research has been done on birds in the Wadden Sea in past decades, and this has shown that the Wadden Sea is an essential link in the flyway of many species. The key to understanding why populations are thriving, or not, is to identify the weakest link, which may be in the Wadden Sea or elsewhere along the flyway. Like many bird species, many fish species also migrate, either annually or at some point during their life. Focusing only on the Wadden Sea might not necessarily reveal the driving force behind the declines in fish numbers that have been observed in the area. To identify the weakest link, populations need to be studied on the appropriate spatial scale, and this approach has now been agreed upon with our fellow Wadden Sea countries, Germany and Denmark.

Eventually we will test in a model setting which management measures are likely to lead to the best improvements in living conditions for fish, and how they should be implemented. We will do this for four different fish guilds (the ecological term for species that use the Wadden Sea in the same way, e.g. marine juveniles, estuarine residents). The measures to be tested will include management adjustments on the salt marshes, areas closed for fishing, construction of bird breeding areas and fish migration facilities. In this way, we will determine whether and how these measures contribute to better living conditions for fish in the Wadden Sea.

of fish appeals to me’

Name: Margot Maathuis
From: The Netherlands

After graduating as a freshwater and marine biologist from the University of Amsterdam, Margot Maathuis worked for an ecological consultancy. ‘But the attraction of scientific research remained,’ says Margot. ‘The societal importance of fish appealed to me. Fishermen earn a living from fish, people eat them. In addition, fish are mobile, respond strongly to their environment, and form an important part of the food web. That’s very interesting from a biological point of view.’ She did volunteer work for years, in the sampling programmes on the NIOZ tidal flats, took part in an Atlantic voyage on the NIOZ research vessel Pelagia, and has been a recreational diver since she was twelve.

Margot will use acoustic techniques to track small pelagic fish such as herring, sprat and anchovy – in the tidal inlets between the islands. One of these techniques is carried out on board a ship equipped with an advanced ‘echosounder’, a device that transmits sound pulses, which are reflected by fish. From the echoes received, the size and density of a school of fish can be determined, as well as its location.

The data obtained from the echo sounding can be used to build up a picture of the depth at which fish swim in the area, and how many of them there are. It will be a little tense using the ultrasound equipment, Margot says: ‘The Wadden Sea is relatively shallow, and this method is usually used in deeper water.’ It is too early to say which fish species are involved. In order to get an idea of what the ultrasound equipment ‘sees’, fishing will also be done regularly, and Margot will sort the catch according to species and age. Clearly, she will still often be found on board a research vessel.

‘We want to find

Hannah Charan-Dixon worked as a fisheries analyst for the New Zealand government after completing her graduate research on sea cucumbers in the Pacific. In the Wadden Sea, she is looking for characteristics of salt marshes that are favourable to fish. ‘We want to find out more about fish life in salt marshes so that these habitats can be made more fish-friendly,’ says Hannah. ‘If, for example, a channel that is connected to a ditch inside the dike is used a lot by migrating fish, you can create a bowl-shaped widening in the water body just in front of the dike, where the fish can rest for a while.’

Fish in the salt marshes

For this study, salt marsh areas scattered along the Wadden Sea that differ in terms of environmental conditions and management were chosen. One is the salt marsh of Schiermonnikoog, which is completely natural and undisturbed; another is the one along the Wadden Sea coast in Groningen, where the most human interference has taken place. Other salt marshes that have been selected are exceptionally saline or grazed by cattle. Each month during Hannah her research, fish will be caught in traps in the water pools on the salt marshes.

my interest in underwater sound’

Listening to fish on an oysterreef

For someone who spent years as a nature guide on adventurous cruises to the polar seas, it is surprising to hear that becoming a marine biologist was not on her ‘radar’ for a long time, but eventually Maryann Watson made the switch. After graduating in Canada, she worked for several years as a contract researcher on conservation projects along the west coast of her native country, as well as in Kiribati in the Pacific and in the Philippines. She was also involved in a traditional fishing programme in New Zealand. For her next career move, Maryann was looking for a more scientific role: ‘Swimway was a good fit, and this area suited my interest in underwater sound.’

That underwater sound is caused by fish species that make grunting noises to communicate with each other. To start with, Maryann will fish with trap nets near mussel beds and tubeworm reefs. During the course of the research, underwater microphones – ‘hydrophones’ – will pick up the underwater sounds, which can then be analysed for fish ‘noises’. Maryann: ‘This has not yet been done in the Dutch part of the Wadden Sea, so what comes out of it will be very interesting.

Maryann hopes that the hydrophone study and the trap fishing will lead to a better understanding of the importance of living underwater reefs as a ‘nursery’ for young fish. ‘After that, the plan is that by applying DNA techniques to the stomach contents of captured predatory fish, we’ll be able to say something about the local food web.’

‘For the first time in my life,

I even boarded a ferry …

the one to Texel!’

Bass Dye grew up in the American Midwest and studied environmental sciences in Iowa and then at Florida Gulf Coast University. There, he developed models to map the distribution of oyster larvae by sea currents. Bass: ‘Computing physical data with the aim of restoring nature appealed to me.’ At the University of Oregon, he specialised in research into the movements of small particles – including fish larvae – in the sea.

Through his particle research, Bass came across NIOZ and was impressed by their work. He was excited by the possibility of doing doctoral research in this field at the marine research institute on the island of Texel. The initial encounter was promising: ‘I even boarded a ferry for the first time in my life … the one to Texel! And the Dutch weather is similar to that of Oregon’. Bass is using his particle expertise to build up a picture of which parts of the Wadden Sea are important as nurseries for various fish species. In this way, he hopes to get a handle on the physical characteristics of places that are popular with fish at different stages of their life.

Bass is enthusiastic about another part of his research project: experimenting with fish in the laboratory under varying conditions of salinity, temperature and acidity. ‘This way, we find out under which conditions they grow best, and this information can be used in the models. I’m really looking forward to doing experimental work as well as computer work.’

fish on such a

large scale is so exciting’

Following fish on their way to the Waddensea

It’s not surprising that Jena Edwards is responsible for the larger fish in Swimway. As a volunteer, she took part in a study of the movements of white sharks off the coast of South Africa. And for her master’s degree, she studied the Greenland shark. For Swimway, Jena will follow the movements of mullet, sea bass, sea trout and tope shark through the Wadden Sea.

Jena will use two techniques to track the four fish species. Acoustic transmitters, in 2cm capsules, will be inserted into the abdominal cavity of captured fish. In addition, the plan is to equip fish with small external devices that store data on temperature and depth. ‘We are going to use a large number of transmitters and receivers, which will make it possible to follow large numbers of fish throughout the Wadden Sea. To that end we will install a large receiver network throughout the western Wadden Sea. Nothing like this has ever been done before,’ says Jena.

Her love of marine research came early. She grew up on the rugged Canadian east coast and studied there as well. As a scientist, Jena is fascinated by movements of fish through the sea and the ‘why’ behind them. ‘I wanted to be a marine biologist from the age of four. Marine life is so different, and that intrigued me. The opportunity to follow fish on such a large scale is so exciting!’